When a good friend of mine told me she was going to be singing in an electronic opera, I felt lucky that the news was not disseminated face-to-face where she most certainly would have seen me raise my eyebrows in suspicion. I’m all for trying new things in opera, really I am, but this one I thought could end up being a bit nouveau-experimental. But being the very supportive friend I am, I decided I would smilingly go along anyway… I mean who doesn’t love the Lower East Side on a sweltering Monday night (think oppressive subway air, Chinatown crowds, and weekend garbage)? But hey, anything that supports a charity is pretty likely to make me give it a go. In this case, the event was part of a four-act evening in support of “To write love on her arms” (TWLOHA), an organization that exists to encourage, inform, inspire, and also to invest directly into treatment and recovery for people struggling with depression, addiction, self-injury, and suicide.

When you walk into Crash Mansion on Bowery, honestly the last thing you think about is opera. Not that it’s a particularly dingy or questionable joint in the least, but it just isn’t the place you’d expect to hear, well, that kind of music. But as part of an evening showcasing four eclectic types of music, it made total sense. The whole event was the brainchild of soprano Caroline Selia, Founder of the Musaic Concert Series, an organization that smears the lines between genres to see what exciting new music can be created. Here you see Caroline in one of her fabulous moments on stage. 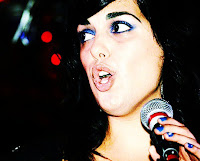 This was only the second event she had ever put together (the first was in December 2009 which received rave reviews), but what a resounding success it was! The evening was divided into four “acts.” The first two were presentations by singer-songwriter Josie Diels and a three-person funk band Razi-El (who were amazing!) while the last highlighted the mesmerizing voices of Isaac and Thorry Koren, otherwise known as The Kin, an Australian brother-band. The third act, however, was most certainly the highlight of the evening… and I’m not just saying that, promise!

The mini-electronica opera, Wednesday Before Last, composed by Kristen Hever with lyrics by Royce Vavrek, follows the lives of six people as they variously discover their own weaknesses and those of their life partners, betray one another, fall in love, decide they’d rather “swing the other way,” or otherwise generally realize that what they thought they knew their reality to be actually changed on the … Wednesday before last. Bass-baritone David Crawford and mezzo Kara Cornell, for my money, were the most accomplished and electrifying singers on stage.

It wasn’t just their voices that captivated but their stage presence, their openness, their complete conviction in every movement they made and note they sang. Rounding out the cast were Dan Radzikowski, Maurice Parent, and Katherine Cardin, who each gave powerful performances as well. Caroline Selia herself also sang and wowed with her glittering, pitch-perfect soprano. None of it could have come off as perfectly as it did, however, without the expert guidance of producer and sound engineer Daniel Wyatt, who we never actually saw but whose mix beats provided a rock solid foundation for the piece.

Though the piece was composed as an opera and is sung by opera singers, it more closely approximates a cross-over piece, vacillating between moments when a rich operatic sound is completely right and other moments when the stronger, more strident sounds of a musical theater voice seem more appropriate. That didn’t bother me at all, though at first I thought it might. The two genres blended together seamlessly, hovering over the continuous stream of calmly – and sometimes even hauntingly - harmonic electronic sounds with reassuring clarity.

I commend Caroline on a brilliant idea and flawless execution. Combining genres and encouraging people to experience the differences in music all in one night and in one place, together, is a genius idea and one that bears further exploration. I commend her further on finding a resoundingly impressive cast, and look forward to hearing what’s in store at her next event on September 23rd, 2010. I’m sure she will continue to put together remarkable evenings such as this one and in support of many more important causes.
Posted by The Opera Insider at 2:50 AM