And to go along with my most recent post, here is Meche Kroops's review of Opera Manattan's Eugene Onegin from this past Saturday night, August 28th. 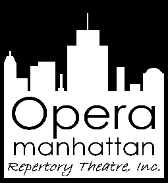 Begone summer opera starvation! The Opera Manhattan Repertory Theatre has come to the rescue with a series of three summer concert presentations, just ended with a nourishing and tasty performance of Eugene Onegin.

Founded recently by opera bass Bryce Smith and musical theater singer Rebecca Greenstein, OMRT is meant to give opera singers the opportunity to take their careers into their own hands by learning new roles to appear on their resumes, thereby assisting them in getting performance opportunities of these same roles elsewhere.

The audience gets an opportunity to hear singers well worth hearing, who they might otherwise miss. Although future works will be done with sets and costumes (see www.OperaManhattan.com for details), the summer series is done concert style with piano accompaniment. I was privileged to have enjoyed both Anna Bolena and Eugene Onegin. Truth be told, I never missed the sets, costumes, titles or orchestra.

The “unsung” heroine of the evening, Violetta Zabbi (on faculty at the New York Opera Studio), played a piano reduction of Tchaikovsky’s score with subtlety and panache. I heard things that I had missed when the opera was presented at the Met with, of course, full orchestra. I admit that my memories of the Robert Carsen production and Michael Levine’s sets and costumes were very much in my mind’s eye as I listened; but memories of Hvorostovsky and Mattila, of Fleming and Hampson, faded in my ear. What was lost in star power was definitely gained in immediacy and intimacy.

Tatyana was beautifully rendered by Maryann Mootos who seemed to put every ounce of herself into the portrayal. Her “letter scene” was a standout. Lensky was very well performed by now-tenor Adam Juran (whom you may recall as a baritone) and I was sorry to see him killed off so early in the work! Vaughn Lindquist was a fine Onegin and Elspeth Davis sang Olga better and better as the evening progressed, although I did not hear a profound contralto quality in her voice.

I did hear a nice contralto quality in the voice of Andrea Nwoke, which lent substance and authority to the role of Madame Larina, Tatyana’s mother. Angeliki Theoharis was fine as Filippyevna, the nurse. In Act I, the quartet of women’s voices blew me away with tender harmonies. As a matter of fact, I found all the ensemble work to be extremely well-balanced.

Bryce Smith himself was princely in both voice and stature as Gremin, and special notice must be given to tenor John Wasiniak who gave a most individual spin to the role of Monsieur Triquet who composes and sings adulatory verses at Tatyana’s name-day party, proving that there are indeed no small roles. James Siranovich served ably as Music Director and Conductor.

Now, don’t I have to find something to complain about? Not from me but from the native-born Russian sitting next to me, came the reply to my question about the adequacy of the singers’ Russian. “Everybody need Russian coach.” Fortunately for me I don’t know a dozen words in Russian so it didn’t bother me one bit.

We can hardly wait for the fall season!
Posted by The Opera Insider at 10:23 AM